The Beat-Magnum (ビートマグナム) is a Mini 4WD car released by Tamiya in 1997. It is the first Fully Cowled Mini 4WD car to uses large-diameter wheels.

It is features in manga and anime Bakusou Kyoudai Let's & Go! WGP as Go Seiba's 4th Magnum series after Cyclone Magnum and before Lightning Magnum.

It returns in Bakusou Kyoudai Let's & Go! Return Racers! during Retsu Seiba's flashback of Seiba brothers' final race before they departs to their own paths.

The Beat-Magnum has some clear resemblance to its predecessor, the Cyclone Magnum, but with some differences.

The first is the additions of the absorber props that is added to the body shell (In the manga and the anime, it was part of the custom chassis the Beat-Magnum uses). It also use large-diameter wheels colored in neon green, paired with low-profile tires.

Some minor changes has been made to the body shell, including the return of rear body rollers, originally seen on the Magnum Saber. Both body and rear stay rollers can be used, although the latter is required in the GPA and Premium versions due to properties of the rear spoilers in the former and the unremovable rear roller stays in the latter (due to its AR Chassis).

Instead of having 'Go' (豪) emblem, in its place is the mark of a red-color dragon with the word 'Beat-Magnum' overlayed on it.

In addition of having the metallic stickers, the Premium version has the optional headlight stickers, similar to those in the Premium re-release of Magnum Saber.

The TRF version includes the holes in certain parts of the body shell, including the cockpit, similar to those used in Fighter Magnum VFX and Cyclone Magnum TRF, as well as change in the color of the rims (white instead of green). In addition, the rear wing has been redesigned and the body shell and the dragon suspension props are now together and were changed from the spring absorbers to hydraulic absorbers.

There are two special versions of the TRF models: the 2014 Black Special and the AR14 Turquoise Special. The former comes in black bodyshell and red wheels and uses Super TZ-X Chassis, while the latter comes in cyan with low profile tires and red small-diameter wheels, and uses AR Chassis.

The GPA version follows the similar style as with other GPA cars, which are designed in mind with GP Chips. This version used high-profile tires and gray color small-diameter wheels. Due to the design of the rear spoiler, only the rear stay roller can be used.

In the manga, anime and video game

In the anime, shortly after the TRF Victorys team lose to Rosso Strada team in a race, Go and the other goes to do some practice races, but during the practice sessions the Cyclone Magnum's chassis was damaged, rendering it unusable. Although Go managed to obtain a chassis made out of ZMC, the incomplete car was not very stable on rough roads. To solve this problem, Go decided to add a pair of absorbers to the machine. This result in the birth of Beat-Magnum. Due to massive downforce and the new chassis the Beat-Magnum cannot use the 'Magnum Tornado' special move, instead Go relies on the absorber's setting, resulting in creating a new move, the 'Magnum Dynamite'.

In the manga, things happens differently than the anime: instead of modified from the normal ZMC-based chassis, Go found the customized Dragon Chassis that already has the pair of absorbers on it during the search for a new chassis. Also in the manga, Beat-Magnum could initiate 'Magnum Tornado' unlike its anime counterpart.

In the video game Hyper Heat, it is one of the machines the original player character can choose after he/she joined the TRF Victorys as the 6th member of the team. The car is also available as a "secret" machine in the Eternal Wings video game, accessible by selecting a custom character in the story mode. In that game, the rear wing of the car has the TRF Victorys logo, and the Magnum Dynamite move found on the original version can also be used, just like in the original car.

In the manga version of Let's & Go! MAX, Dr. Tsuchiya use the Beat-Magnum TRF to race against Gouki Ichimonji's unmodified Breaker, with the TRF comes out as the winner.

Boxart of Beat-Magnum Premium.
Add a photo to this gallery 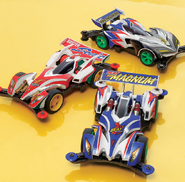 Beat-Magnum Premium, with Buster-Sonic Premium and Z Wing Magnum.
Add a photo to this gallery

Retrieved from "https://mini-4wd.fandom.com/wiki/Beat-Magnum?oldid=5861"
Community content is available under CC-BY-SA unless otherwise noted.