Blast Arrow (Japanese: ブラストアロー, Burasuto Arō) is a Mini 4wd car released by Tamiya on June 29, 2013. It was the first Mini 4wd car to be released with the all-new MA Chassis.

The bodyshell design of the Blast Arrow is based on and inspired by the Le Mans Prototype (LMP) race cars and is fully-cowled.

The side air-ducts are also designed into the body to dissipate heat from the batteries inside. There are various faux-sponsor decals around the bodyshell, mostly the products Tamiya had released such as mass damper and Neo-Champ Batteries among other examples.

All models were equipped with the small-diameter fin-type low-profile wheels paired with low-profile slick tires.

The bodyshell of the standard model was mainly in white color, with blue and silver stripes highlighting its lines.

It was equipped with white wheels and black tires, The chassis frame and the A parts were molded in dark grey and blue respectively.

The normal version of the car was also included in the Mini 4WD Starter Pack MA Power Spec. Unlike the regular one, its chassis's A parts are molded in red.

The Black Special variant features the black body color with white stripes all over the bodyshell.

It was equipped with black wheels and white tires. The chassis frame and the A parts were molded in black and white respectively.

It was equipped with blue wheels and cyan tires. The chassis frame and the A parts were both molded in white.

Boxart of the Blast Arrow.

Boxart of Aluminum Metallic variant.
Add a photo to this gallery 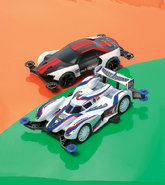 Blast Arrow and Astralster.
Add a photo to this gallery

Retrieved from "https://mini-4wd.fandom.com/wiki/Blast_Arrow?oldid=13210"
Community content is available under CC-BY-SA unless otherwise noted.