The special parts set consists of 3 items: The yellow large-diameter low-profile wheels that was paired with the blue low-profile tires that has the 'Coro Coro Aniki' and 'Tamiya Mini 4WD' prints on the side of the tires, a special FRP wide front plate set with the CoroCoro Aniki printing and a dress-up stickers featuring the logo of 2015 Japan Cup, the Tamiya logo and the artworks of characters from manga series Bakusou Kyoudai Let's & Go! Return Racers!, Dash! Yonkuro and Hyper Dash! Yonkuro.

The set can be used on any Mini 4WD car, but the DUS will work best with any of the Mini 4WD cars that were featured in the aforementioned manga series. 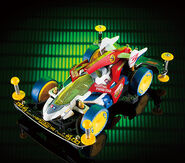