Go Seiba
The Cyclone Magnum (Japanese: サイクロンマグナム, Saikuron Magunamu) is a Fully Cowled Mini 4WD car released by Tamiya on September 18, 1996. The TRF version, as well as the Premium variant of the car, were also released in 1997 and 2014 respectively.

The Cyclone Magnum featuring the fully-cowled body design that has been redesigned from the ground up.

The front nose tip of the car became thinner and sharper, with the entire front became more diamond-shaped. The front cowls were separated from the nose and were more square-shaped, with the rear half of it were removed, exposing the half of the front wheels and tires. The rear fenders were became more blocky and were placed at the same height as the black canopy. There's a wider large rear spoiler attached to the bodyshell via 2-point attachments and is extended toward the rear of the car.

The standard variant and Premium variant featuring the very same color scheme as its predecessors, with the white base body with blue flame-styled highlight with red trims. Above the 'Go' emblem on the front and on the winglets is the 'C Magnum' decals.

The original variant was equipped with the fluorescent green, small-diameter 6-spoke TZ-type wheels paired with the black high profile slick tires, while the Premium variant was equipped with the the fluorescent green, small diameter 5-spoke Saber-type low-profile wheels paired with the black low profile slick tires. The original variant's chassis frame and A parts were molded in black, while the Premium variant's were molded in metallic gray and blue respectively.

Only the Premium variant comes with a standard motor.

The TRF version includes the holes in certain parts of the bodyshell, including the canopy, similar to those used in Fighter Magnum VFX and Beat-Magnum TRF, as well as change in the wheel color (white instead of fluorescent green). In addition, the rear wing has been redesigned. It is mainly in white, with blue/yellow highlights.

The limited Blue Plated and TRF Purple Plated variants comes with the bodyshells painted in blue plate and purple plate color respectively. In addition, the chassis frame and A parts were molded in black smoke and white respectively.

Unlike the original variant and the TRF variant, both plated variants comes with the standard motors.

21st Century I and II

The Charatoru-limited special variants were released in two different versions with two sets of colors. All variants were equipped with the Super TZ-X Chassis.

The Indonesia-exclusive, limited edition Graha Tamiya 1st Anniversary Special variant was based on the TRF variant. It features the orange body color with white and yellow highlights.

It was equipped with the yellow, small-diameter 3-spoke VS-type wheels and the white X-type narrow slick tires. It has the polycarbonate-mixed ABS reinforced chassis frame and A parts molded in white and orange respectively.

The Blue Metallic Version variant, first released as a CoroCoro Aniki-exclusive item and later sold at the Tamiya events, features the blue plated bodyshell and green plated wheels. The kit also comes with a original body decals designed by Tetsuhiro Koshita, which also appeared in the manga.

Most of the specs, however, are the same as the standard Premium variant.

The Memorial variant, which was created to celebrate 25 years of Fully Cowled Mini 4WD lineup, features the polycarbonate bodyshell with plastic attachments. Like the 21st Century variants, it was equipped with the Super TZ-X Chassis.

It was equipped with the fluorescent green, 6-spoke spiral type wheels paired with the black low-profile tires. The chassis frame and A parts were molded in white. It comes with the blue, 13mm plastic rollers on the front.

In Return Racers!, in order to race against Retsu and Chiiko and their Great BlastSonic on the beach, the teenage Go created a customized blue metallic version of the Cyclone Magnum Premium kit (sporting the thunder-pattern body decal) as his Great Magnum Revolver was still under repair following his race against Haruto and his Haru 100 at the Japan Cup race in the last chapter.

In the game, the Cyclone Magnum bodyshell was introduced in March 25, 2020, and was obtainable in multiple time-limited gacha even since. Its skill is the Flying Machine, which increase the top speed even further than the Speed Up+ skill. There's also a game-exclusive blue plated bodyshell, but the difference is purely aesthetic.

A Soramaru Christmas Special variant of the Cyclone Magnum was introduced in December 2020 as a reward for beating the voice actress Sora Tokui in a time-limited event that was held from December 16 to 26, 2020. This variant has the Power Up+ skill.

The TRF variant was later introduced in January 2021. Unlike the rest of the bodyshells, the TRF variant is lighter, weighted at only 10 grams in unmodified state. Its special skill is Efficiency Up+.

Boxart of the Special Kit. 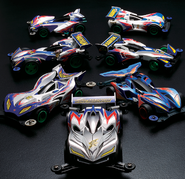