It only appear in the manga Shin Dash! Yonkuro and in a Tamiya catalogue but only custom were made, and is officially not made yet. The motor is front like in the Neo Burning Sun.

The Cannonball Wail's body design was largely the same as the original Cannonball, except with few key differences; The headlights was changed from cone-type to rectangle-shaped, the rear spoiler is removed and the bodyshell has more blocky body line. As it is a front-motor car, the gearbox is clearly exposed.

It is mainly in green, with yellow trims on it.

In Shin Dash! Yonkuro, Punkuro, along with Rinko and Shinkuro, receives their new machine from Kaidanji Sumeragi, much to Yonkuro and Tankuro's dismay as Mr. Sumeragi didn't made the new cars for them. 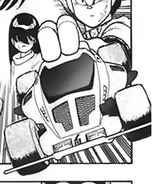 New Dash machines including the Cannonball Wail.
Add a photo to this gallery

Retrieved from "https://mini-4wd.fandom.com/wiki/Dash-04_Cannonball_Wail?oldid=14223"
Community content is available under CC-BY-SA unless otherwise noted.