It was featured in manga and anime Dash! Yonkuro as the primary machine for the protagonist, Yonkuro Hinomaru. It was also features in the on-going manga, Hyper Dash! Yonkuro.

The Emperor features the typical R/C buggy design bodyshell with two-tone stripes. On the front is a mono-shock prop and a pair of upper arm props. There are headlight props mounted on the front side of the canopy while on the rear, there is a rear spoiler with a large 'DASH!' decal.

On the front is the CoroCoro Dragon logo and a decal with the numbers '496'.

The original Type-1 and Type-3 variants of the Emperor features the white body color, with blue canopy, red and orange stripes and yellow front mono-shock

The Premium variant features the same coloring as the original Type-1 and Type-3 variants but with the body decals being changed from paper-type to foil-type to give it the metallic-like appearance.

It was equipped with the metal gray, large diameter 6-spoke Manta Ray-type wheels paired with the black Avante-type slick tires. The chassis frame was molded in black, while the A parts and the easy locking gear cover were molded in blue.

The limited, Charatoru-exclusive Imperial Force variants, has the silver and two-tone red and black stripe-styled body decals, with the metallic red canopy. It has four color variants: Pearl, clear red, orange, and smoke. However, the body decals works best with the pearl color variant.

Depends on the color variants, it either came with the white chassis and white tires, or black chassis and orange tires. All variants were equipped with the black, large diameter 6-spoke Manta Ray-type wheels paired with the Avante-type slick tires.

Based on the MS variant, the Memorial variant of the Emperor was released to celebrate 30 years of Tamiya Mini 4WD Japan Cup.

It features the silver plated bodyshell with the black and carbon-pattern body decals.

Before the race against the thugs who were causing trouble around the off-road track that he and his friends made, Yonkuro was given a mysterious box by Mr. Sumeragi.

During the race, the thugs employ a dirty tactic by detonating bombs that have been buried into the race track beforehand. Yonkuro's Boomerang Jr. was severely damaged by the explosions but remembering the box that Mr. Sumeragi gave him, he opened the box and found that it contained the parts of his new car. Yonkuro had only assembled the new car's body and had his busted Boomerang's chassis recycled into his new car. Thanks to the new car, now known as the Dash-1 Emperor, Yonkuro and company won the race against the thugs.

During one of the races in the Mini 4WD Championship arc, The Emperor was struck by lightning at the last minute before it could cross the finish line. Mr. Sumeragi later have it repaired but it was busted again during the semi-final against the Emperor trio in the National Tournament, forcing Yonkuro to use the Great Emperor in the final.

The car was later rebuilt and used in the 2nd round of the Hell Caravan rally during the Black Mistral arc until it was melted due to the high heat of the lava race track.

In Hyper Dash! Yonkuro, the Emperor was, once again, Yonkuro's primary machine. It was used to race against the Dash Warrior members and, later, against Kill Crow. However, the explosion caused by Kill Crow's Night Seek Trigger had severely damaged the Emperor's chassis, rendering it unusable. This forced Mr.Sumeragi to secretly replace the entire car with the new one with part of the Emperor's parts equipped without Yonkuro and co.'s knowledge.

Boxart of the Type-1 variant.

Boxart of the Type-3 variant.

Boxart of the Memorial variant.
Add a photo to this gallery

The busted Emperor, during the Mini 4WD Tournament arc.
Add a photo to this gallery

The Emperor with the customized '496' chassis by Benpira 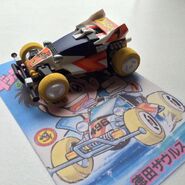 The Emperor with custom chassis by Dolleydoll. 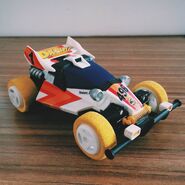 The Emperor with custom chassis by Dolleydoll (Angled front view). 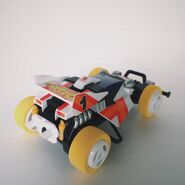 The Emperor with custom chassis by Dolleydoll. (Angled rear view)l
Add a photo to this gallery

Retrieved from "https://mini-4wd.fandom.com/wiki/Dash-1_Emperor?oldid=13963"
Community content is available under CC-BY-SA unless otherwise noted.