Jin Kidouin
The Dash-X1 Proto-Emperor (Japanese: ダッシュX1 , Dasshu Ekkusu Wan Puroto Emperā) is a Racing Mini 4WD car released by Tamiya in November 1990. It was originally released as a limited edition body set during the 1990's Tamiya Autumn Cup tournament, and later as a limited edition Mini 4WD kit (with VS Chassis) on November 28, 2009 and as a regular release kit on January 12, 2013 (with Super-II Chassis).

It was featured in manga and anime Dash! Yonkuro as Jin Kidouin's machine. It was superseded by Proto-Emperor ZX in the series's run.

The Proto-Emperor featuring the body design similar to that of the Emperor, but with some differences; The main headlights are the blocky-style built-in-type and instead of the rear spoiler on the rear, it has the pair of wings in its place. On the front, there's the sub-headlights.

The bodyset, VS and Premium variants[edit | edit source]

The bodyset, VS variant and the Premium variant features bodyshell that is mainly in purple, with black and silver trims on it.

Based on the Premium variant, the Black Special features the black bodyshell with special decals on it.

It was equipped with the black, large diameter 5-spoke narrow lightweight wheels paired with the yellow arched tires. The chassis frame, A parts and the easy locking gear cover were molded in different shades of yellow.

In the manga and anime[edit | edit source]

In the series, Jin Kidouin was given the Proto-Emperor by Kaidanji Sumeragi during the time he was the team member of a team that Sumeragi founded. A while after the team was disbanded, the Proto-Emperor was modified by Boo, who installed the Black Unit (a type of ball differentials on the front and the rear wheels) to enhance the car's capabilities. Its performance is comparable to Yonkuro's Super Emperor.

Although Kidouin won the race against Yonkuro outside the tournament before the regional tournament final, he ultimately lose to Yonkuro in the final when the latter use the special 'fence running' technique to overtakes Kidouin's car.

Boxart of the VS Chassis variant.

Boxart of Premium Black Special.
Add a photo to this gallery 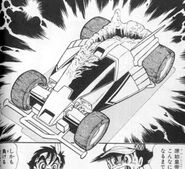 The busted Proto-Emperor in Black Mistral arc.
Add a photo to this gallery

Retrieved from "https://mini-4wd.fandom.com/wiki/Dash-X1_Proto-Emperor?oldid=14758"
Community content is available under CC-BY-SA unless otherwise noted.