Start a Wiki
The Ford Ranger 4x4 Pickup (Japanese: フォード・レインジャー 4x4, Fōdo Reinjā Fōbaifō) is a Original Mini 4WD car released by Tamiya in July 13, 1982 and is the first Mini 4WD car ever produced by the company.

It was released alongside Chevrolet Pickup 4x4 in the same date.

It is based on the first-generation North America Ford Ranger pickup truck that was produced from 1982 to 1992.

In addition to the 3-color stripes around the bodyshell, it has several manufacturer and OEM decals, such as Goodyear. It is mainly in blue.

It comes with the pickup-1 wheels with block-style tires.

Unveiled in 1982, the Ford Ranger is a compact pickup truck that was produced by Ford from 1983 to 2012 for North America market.

The first-generation Ranger received a facelift in 1988, with exterior design changes, the addition of the rear anti-lock brakes and the improved chassis frame. 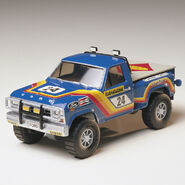 Ford Ranger 4x4 Pickup in its original color.
Add a photo to this gallery

Retrieved from "https://mini-4wd.fandom.com/wiki/Ford_Ranger_4x4_Pickup?oldid=10705"
Community content is available under CC-BY-SA unless otherwise noted.