Dankuro 'Tankuro' Toda
The Hotshot Junior (Japanese: ホットショットJr., Hottoshotto Junia) is the very first Mini 4WD car as well as the first Racing Mini 4WD car released by Tamiya on June 16, 1986. It is the scale-down version of the Hotshot R/C buggy made by the same company.

The car was featured in manga and anime Dash! Yonkuro as Dankuro 'Tankuro' Toda's machine shortly after his Monster Beetle Jr. was lost in a accident. It was eventually replaced by Dash-2 Burning Sun later on.

The Hotshot Jr. featuring the more aggressive-looking bodyshell design with the partially exposed cockpit with the driver figurine in it. The monoshock damper props and upper arms are also presented. All variants features a white rooftop.

All MS variants comes with the N-02 nose unit and T-01 tail unit for its MS Chassis and paired with the standard, light gray 16 mm lightweight plastic rollers.

The standard Type-1 and MS variants features the red bodycolor and monoshock prop.

The limited Special variant, which was released around the same timing as the standard Type-1 variant, features the clear chassis frame, A parts and the red tires.

It was equipped with the gold plated, large diameter 5-spoke lightweight wheels paired with the deep orange arched tires. The nose, the lightweight center, the tail and the A parts were molded in fluorescent orange.

Both variants, named after two of the famous Japanese baseball teams, features the black bodyshell, with unique decal designs.

Released in 1985, the Hotshot is the very first shaft-driven 4WD R/C buggy made by Tamiya.

Its 3-piece chassis is supported by the front/rear monoshocks and 4-wheel double wishbone suspensions that were equipped with stabilizers. The gearboxes are fully enclosed and has the thrust ball bearings and differential gears.

On the motor mount, there's the heatsinks for it which dissipate heat from the old-school, servo-powered mechanical speed controller (MSC).

Tamiya would later re-released the Hotshot in 2007, with some changes such as replaced the heatsinks with the dummies (This is due to the inclusion of the electric speed controller (ESC), which produces less heat than the MSC) and the improved dog bone type driveshafts.

Boxart of the Hotshot. 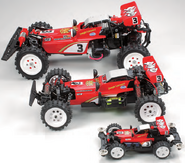 Hotshot and its R/C siblings.

R/C buggy that the Mini 4WD car is based on