Tamiya holds the Japan Cup around June to October each years. (formerly July to August prior to hiatus after Japan Cup 1999) The main sponsors for Japan Cup beside Tamiya are Fujitsu and Shogakukan.

Instead of the 3-lane circuits, the Japan Cup, much like Grand Prix Spring, Autumn Cup and Mini 4WD Grand Prix, uses the 5-lane circuits that allows up to 5 racers at once.

Starting with the 2016 season, participants who are over 18 years-old and are attending the Open Class will require to fill-in the electronic entry application form through either on Tamiya official website[1] (For both in Japan and oversea.) or through Tamiya Passport app (for those in Japan only), prior to entering the race events. 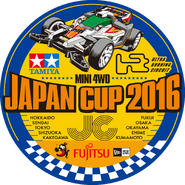 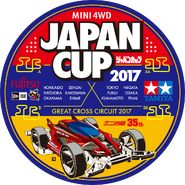 Logo of Japan Cup 2017 season.
Add a photo to this gallery

Retrieved from "https://mini-4wd.fandom.com/wiki/Japan_Cup?oldid=14335"
Community content is available under CC-BY-SA unless otherwise noted.