Mini 4WD Wiki
Register
Don't have an account?
Sign In
Advertisement
in: Reinforcing parts, Stays and side guards, Grade-Up Parts,
and 4 more

As their names implies, they are the series of basic parts sets, designed for those who just started into the Mini 4WD racing.

The most common setups with those sets are 2 front rollers with hi-stablizer ball caps, 4 rear rollers with mass dampers.

Traditionally, new sets will be released every time the new Mini 4WD chassis was made. Despite this, the sets are compatible with almost every chassis to date. 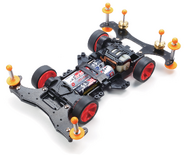