A deviative from the Night Seek, it was made and owns by Mr.G, whose identity is Genkuro Hinomaru, who takes the Mr.G name from the alternative version of Yonkuro himself.

The Night Seek G has most of the features of its base car. The knife-shaped canopy, the black body color and the sharp body design were remains untouched. The G, however, has some key differences; It spots a pair of additional front fenders and a rear spoiler and cowls. Also, red lines are also running through the additional parts.

It is in black, with red and metal silver highlights on it.

It was equipped with the black large-diameter MS-type II wheel with Avante-type slick tires. The sub-parts of the chassis were molded in gray.

The Night Seek G was the base car of all the Dark Dominion's machines.Like the rest of the Night Seek-based machines, the G was equipped with the MA Chassis made of Tungsten metal, the high-output batteries and high torque motor.

In PHASE 5 and PHASE 6, Mr.G was seen holding the Night Seek G in the past. It was revealed that the Night Seek G has the gravity control mechanism, in which several spinning gyros (That were spinning at the same speed as the wheels) offsetting the acceleration while generating g-forces on the car, allows it to sticking onto the road surfaces no matter what. According to him, the Night Seek G is a 'eternal horizon' that won't leave the surfaces.

It was implies that Mr.G's Night Seek G has been upgraded into the Over the Horizon. This was more than less comfirmed by Hell Crow, as the Dark Machines are no more than the prototypes and the data gather from them was used to create the Black Dash Machines. 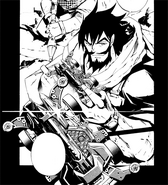 Mr.G and the Night Seek G, as seen in Hyper Dash! Yonkuro.
Add a photo to this gallery

Orthographic views (With clear canopy) by Hiroyuki Takei.
Add a photo to this gallery

Retrieved from "https://mini-4wd.fandom.com/wiki/Night_Seek_G?oldid=12615"
Community content is available under CC-BY-SA unless otherwise noted.