It was featured in the on-going manga Hyper Dash! Yonkuro as one of the street Mini 4WD racers' machines.

The Raikiri features a 2x2 sports car body design, designed by Znug Design (Kota Nezu). Inspired by a Japanese sword of the same name in Japanese mythology, the Raikiri has sharp and crisp edges that can be found over its bodyshell. It has the sharp headlights and the signal lights with the style inspired by sports cars, specifically the 2016 revival of the Honda/Acura NSX.

The underneath of the bodyshell was designed to allows smooth and twister-like airflows.

The standard Raikiri features the black body color, with pink trims on it.

It is equipped with the newly-designed, small diameter low-profile wheels that are colored in gun metal and were paired with the black low-profile slick tires. The chassis frame and the A parts were molded in gray and light gray respectively.

The limited Japan Cup 2016 features the white body color, while the Japan Cup-inspired body decals on it.

It was equipped with the red, small diameter low-profile Y-spoke wheels with the black low-profile tires. Both the chassis frame and the A parts were molded in black.

Other than that, it is mostly the same as the standard model.

Other than that, it is mostly the same as the standard model.

The Pink Special variant features the clear polycarbonate bodyshell with plastic body mounting attached. Because cutting is also required, this makes the assembly of the car harder for those not used to this.

The Raikiri, along with Astralster and Ablista, are racing machines belongs to the street Mini 4WD participants. They were however, unfortunately got rammed out of the circuit by Tankuro's Burning Sun. 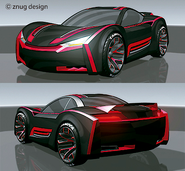