The Shooting Proud Star (Japanese: シューティングプラウドスター, Shūtingu Puraudo Sutā, also known as in the manga) is a Mini 4WD PRO car released by Tamiya on July 18, 2015.

The Shooting Proud Star is the sharper and modernized version of the Dash-3 Shooting Star which produces less drag. As with its predecessor, it has the CoroCoro Dragon mark and the stylized '3' mark on the bodyshell.

The main air-intake has been extended to the middle and above the canopy. Side air-ducts are also incorporated into the bodyshell and designed to dissipate heat from the batteries while running. The bodyshell is mainly in white with blue stripes and some silver parts. The damper props was also present but with a much simpler design.

The standard variant featuring the white body color with blue highlights, a color scheme that was carried over from its predecessors.

It was also the first Mini 4WD car on the MA Chassis to have large diameter wheels (the white 4-spoke MS-type II) and the black Avante-type slick tires equipped by default. Like the Blast Arrow, the chassis frame and the A parts were molded in dark grey and blue respectively.

The limited Clear Blue Special variant, based on the 'Meteor Fall' colored sketch made by Takei, featuring the clear blue bodyshell with gold highlights.

It was equipped with the blue plated, large diameter 4-spoke MS-type II wheels paired with the black super hard Avante-type slick tires with white sideprints. The polycarbonate-mixed ABS chassis frame and A parts were molded in gray and pale respectively.

Like the rest of the Hyper Dash machines, The Shooting Proud Star was equipped with the MA Chassis made of carbon-mixed nylon plastic.

Kaidanji Sumeragi shows the Hyper Dash machines (including the Shooting Proud Star) to the Dash Warriors members, however, he think it's not the time to give them to his team, much to Yonkuro and everyone's surprise.[1]

During the race between Yonkuro's Dash-1 Emperor and Kill Crow's Night Seek Trigger inside Tamiya Plamodel Factory Shimbashi shop where Mr. Sumeragi works, Kill Crow becomes frustrated and couldn't accept the fact that Yonkuro's car overtaken his car. He attempts to detonate his own car using his cellphone but fortunately, Shinkuro arrived just in the nick of time and knocks the cellphone off of Kill Crow's hand with his new car, the Shooting Proud Star.

Kill Crow however managed to detonate his car with his wristwatch, causing an explosion from inside the model shop. Luckily, Shinkuro, along with Yonkuro, Mr. Sumeragi and Omaezaki, escaped unscathed, while Kill Crow goes missing.[2]

During the race on the first course of Dark Dominion Castle race at Shinkuro's house (which was taken over by Dark Dominion, much to Shinkuro's dismay), Yonkuro's Emperor got damaged by the dragon series Mini 4WD cars. Fortunately, Shinkuro's Shooting Proud Star, now attached with the Shooting Container Booster (Which itself contains the reinforced parts for Yonkuro's Emperor), arrived in just time to provide and modified the Emperor into Rise-Emperor.[3]

After seeing Punkuro lose against Comp Crow and his Night Seek Rod as his Cannonball was destroyed and fell into the abyss, Shinkuro begin to shiver in fear, but Yonkuro's words makes him realize that there's a meaning of the 'Clock Tower' course. Looking at the abyss between the starting point and the clock gears, he realized that there is a way to defeat Comp Crow. Shinkuro soon has his Shooting Proud Star equipped with the parts modified from his repaired Shooting Star to form the '33' configuration. By using the sea breezes created by the spring tide to his advantage, the Shooting Proud Star re-emerge from the second abyss and flying toward the goal ahead of Night Seek Rod, clearing the third course.[4]

Although the standard Shooting Proud Star bodyshell wasn't implemented in the game, a special game-exclusive variant of the Shooting Proud Star, known as Shooting Infinite Star, can be obtained in a The Idolmaster: Million Live! Theater Days collaboration time-limited gasha that was open from May 24 to June 9, 2021. The regular and the hologram sticker version can be obtain from the gasha.

The Shooting Infinite Star, based on the Infinite Sky costume that appears in Million Live! Theater Days, is a straight-attribute parts, with a significant body skill "Shooting Star", in which increase the top speed of the car that is comparable to both Bergkaiser and Beat-Magnum, but with the increased wind resistance for the eligible equipped parts.

Boxart of the standard variant. 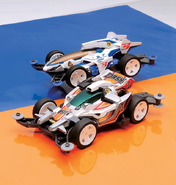 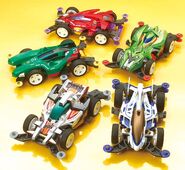 Orthographic views (With clear canopy) of '33' by Hiroyuki Takei.