It was belongs to a grown up Tokichi Mikuni, modified from the Spin-Axe.

The canopy and rear fins parts resembling the one from the Spin-Viper, and the headlamps has been changed to the triangle-shaped ones. It also missing the front wheel guards.

In order to win against the young man (who is a construction worker worked for Tokichi's company) in a rematch, Tokichi modified the Spin-Axe's body by thinning it to the point that the bodyshell has become partially transparent to reduce the car's total weight. 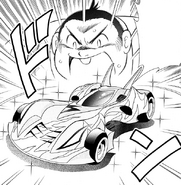 Retrieved from "https://mini-4wd.fandom.com/wiki/Spin-Axe_Zero?oldid=10589"
Community content is available under CC-BY-SA unless otherwise noted.