It was featured in the manga and anime Bakusou Kyoudai Let's & Go! where it was made by Tesshin Okada, and was kept by Dr.Tsuchiya. It was the prototype and the base of the Saber machines the Seiba brothers own. The RS variant was also used by Shun Daichi in Let's & Go! Tsubasa: The Next Racers.

In anime and manga Edit

Shortly after the Seiba brothers left a virtual racing simulator in Dr. Tsuchiya's lab, they found out that someone has been broken into the lab and stolen the Super Avante. In the end, they retrieved the Super Avante despite it being damaged; losing a front right wheel and the front right bumper parts.

In the anime version, it was two armed thugs hired by Dr. Ogami who stole the Super Avante, while in the manga, it was someone from an undisclosed rival company.

Unlike the original Super Avante in the Let's & Go! series, Shun's Super Avante was a mass-produced model (as is in real-life), but was heavily tuned and matching that of Tsubasa's Z Wing Magnum in terms of overall performance. 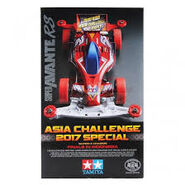 Retrieved from "https://mini-4wd.fandom.com/wiki/Super_Avante?oldid=14519"
Community content is available under CC-BY-SA unless otherwise noted.