The Tri Gale featuring the sharp, angular and aggressive racing car body design, with the sharp-looking front cowls and jutting nose that forms the three-pronged look. and a large rear spoiler on the rear. It resembles the Lamborghini Egoista concept car, although the Egoista lacks a rear wing.

The Tri Gale is mainly in blue, with yellow, white and black stripes, carbon-patterns and red canopy.

It was equipped with the silver, small diameter fin-type low-profile wheels paired with the black low-profile slick tires. The chassis frame and the A parts were molded in gray and light gray respectively.

It was equipped with the blue, small diameter low-profile dish-type wheels paired with the red hard compound low-profile slick tires. The chassis frame and the A parts were molded in blue and red respectively.

The limited edition, Japan Cup 2017 variant has the soft orange body color with the Japan Cup-inspired body decals that has black, red as well as the carbon-patterned highlights.

It was equipped with the dark silver, small diameter low-profile A-spoke wheels paired with the white hard-compound low profile tires. The chassis frame and the A parts were molded in black and white respectively.

It was equipped with the black, small diameter fin-type low-profile wheels paired with the maroon low-friction low-profile slick tires. The polycarbonate ABS chassis frame and the A parts were molded in black and red respectively.

The Silver Metallic variant comes with the silver plated bodyshell. Other than that, it is mostly the same as the standard model.

Boxart of the Tri Gale.

Boxart of the Black Special variant. 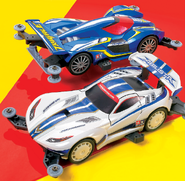