Back to page
View source

It was featured in the manga and anime Bakusou Kyoudai Let's & Go! as Ryo Takaba's machine. It was superseded by the Neo-Tridagger ZMC in the series.

The Tridagger X featuring the fully cowled body design that has the blocky front cowl, smooth rear cowl and the M-shaped rear spoiler. They are a pair of 6-roll spring props that can be seen on the front cowl, and has the large air-ducts on the front of the rear cowl. It has the silver-colored, 3-window cockpit.

Flame-styled decals were presented on the bodyshell, so is the 'Tridagger X' decal on the front nose and the 'Brute Power' decal on the rear spoiler (removed in the Premium variant).

It is mainly in gun-metal gray, with red and orange flame decals on it.

The original Tridagger X comes with the blue-colored curve side-guard attachment and was equipped with the red small-diameter 3-spoke Fully Cowled-type whee paired with high-profile slick tires. The sub-parts of the chassis for the original were molded in green.

The Premium variant, however, is equipped with the red small-diameter 5-spoke Saber-type low-profile wheels with low-profile slick tires. It comes with the deep red reinforced chassis made of Polycarbonate-mixed ABS plastic and the sub-parts of the chassis for this variant were molded in black. The flame decals were also significantly changed.

The Tridagger X was made by Dr. Tsuchiya as one of the prototype fully cowled machines (along with the Sabers and Spin-Axe). It was given to Ryo Takaba.

It is very fast on straight-line and is faster than Magnum Saber, but is slow on cornering due to its aggressive roller setting. Unlike Magnum Saber, however, is that the Tridagger could run faster on rough surfaces and could ram most, if not all, obstacles that stands in its way. It also has the very strong downforce and is capable of fence-running on corners (With either having Ryo hitting the car with a button to change its direction, or having the car's rollers' thrust angle changed toward upward.)

When Jiromaru, the youngest of the Takaba brothers, taking the Tridagger to race against the Seiba brothers, Jiromaru equipped his brother's car with the heavy armor (to the readers/viewers, this conceals the shape of the car until it's fully revealed later during the race). However said armor was hindering the Tridagger due to its weight.

In Return Racers, it was revealed that the Tridagger X suffered a damage once because of a brown bear that appeared during a race against the Seiba brothers in Hokkaido. Ryo has to fix it up with the hairs he took from said bear, evolving it into Tridagger WX. After the race it was reverted and repaired.[1]

It was ultimately destroyed when it was sliced in half by Kai Okita's Beak Spider during the Great Japan Cup Summer race to protect Go's Victory Magnum in the anime and during a amateur race in the manga.

The first generation Mini 4WD Fighter was seen challenging himself to assemble a Tridagger X in 60 seconds. Even though he is able to complete the car in time, the car was shattered to pieces when it hit the wall while running.

Boxart of the original Tridagger X. 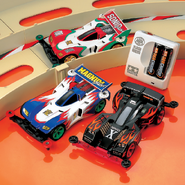