Toppu Kudo
The Winning Bird (Japanese: ウイニングバード, Uiningu Bādo) is a Racing Mini 4WD car released by Tamiya on April 3, 1990. It is the second Mini 4WD car from the Dream Attack project started by Tamiya and Shogakukan.

Rola Hoshino, one of original characters in the game, owns a Winning Bird, equipped with the Super-1 Chassis, gray-colored FM-type wheels and sponge tires. 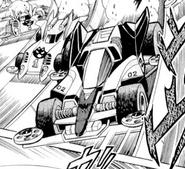